Skip to Main Content
It looks like you're using Internet Explorer 11 or older. This website works best with modern browsers such as the latest versions of Chrome, Firefox, Safari, and Edge. If you continue with this browser, you may see unexpected results.

Note: not all assignments require all the sections below. Speak with your instructor if you are unsure what sections to include.

Have questions about APA formatting? 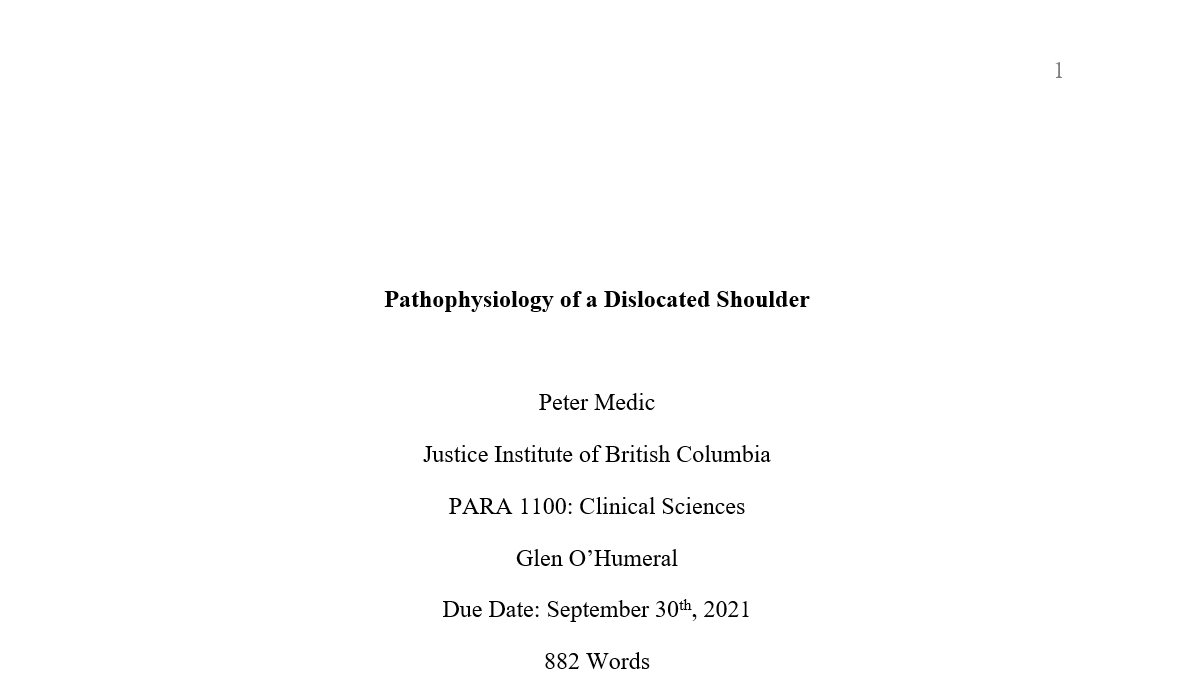 Unless you are requested by your instructor to write your paper in the Professional Style of APA, use the Student Style format. If you are unsure which style to use, ask your instructor for clarification. 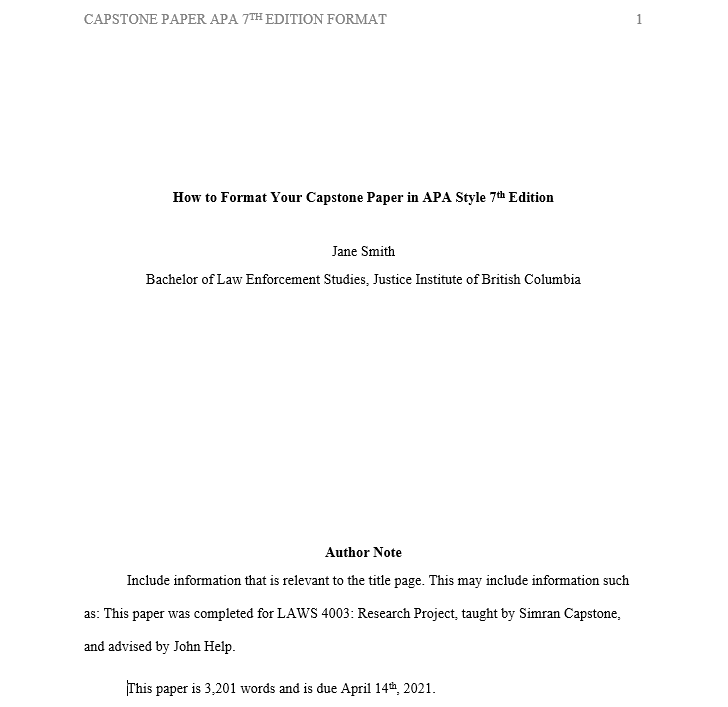 Page number included in the header, in the top right corner. Ensure it is the same font as the rest of your paper.

The running head is an abbreviated version of the paper title that appears in the header at the top of every page to identify it for readers.

An author note provides additional information about authors, study registration, data sharing, disclaimers or statements regarding conflict of interest, and help or funding that supported the research. The author note is written in the style of paragraphs.

Students using the professional style of formatting should use the author note to include:

The author note may be arranged in separate paragraphs to maintain organization of ideas. For example, students may choose to keep course information, due dates, and word counts together in one paragraph and instructors, advisors, and/or sponsors in a second paragraph.

Note: most student papers do not require an abstract, ask your instructor if you are unsure.

An abstract is a brief, comprehensive summary of the contents of the paper and can be accompanied by a list of keywords. 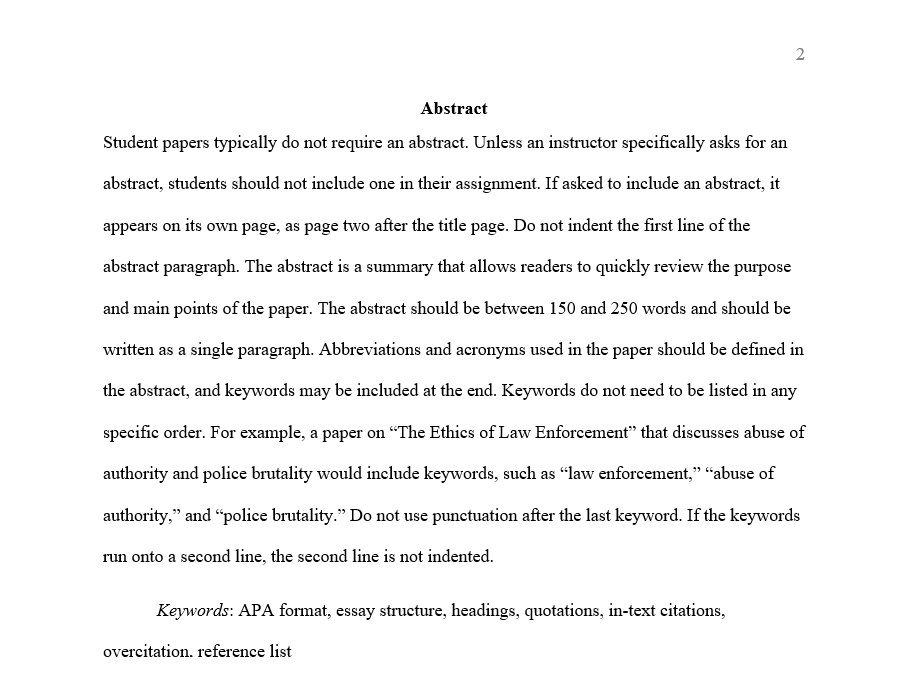 Headings in your paper help organize your argument and signal to your reader what type of information is in each section.

APA provides 5 levels of headings and sub-headings. Most student papers are not long enough to use all five levels.

Use the chart and image below to understand how to format headings. 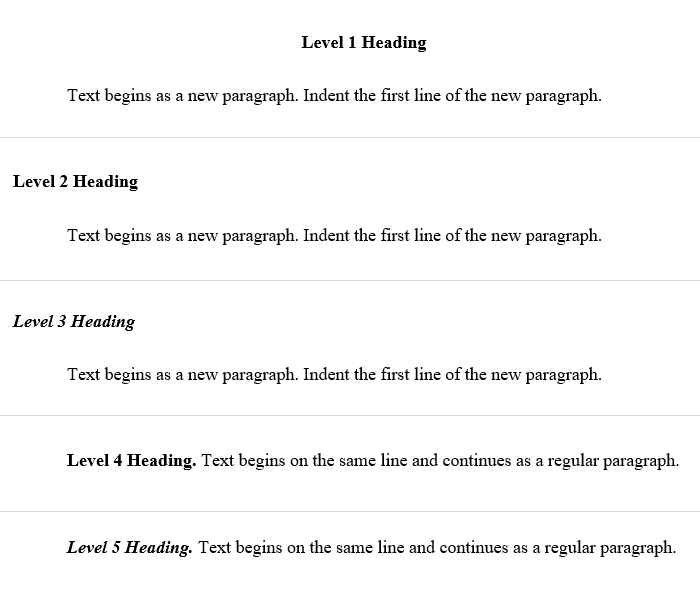 Headings, section labels, and titles in APA Style follow Title Casing. Title Casing is a style of capitalization that has five rules:

e.g. The Impact of Blunt-Force Trauma to the Brain.

Special labels are Level-1 Headings that separate parts of a paper. Start a section heading on a new page. Common sections include:

A quotation is the exact reproduction of words from another source or from your own previously published work. There are two types of quotes in APA format: quotations and block quotations.

If you are using a direct quote from a source that is 39 words or less, than you are required to surround the quotation within quotation marks. “ ”

If you are using a direct quote from a source and the quote is 40 words or more, than there are special formatting considerations. You will need to treat it as a block quote.

Recruits may not graduate for a variety of reasons:

These reasons may include personal reasons (e.g., they no longer want to work in law
enforcement), physical training (PT) session failures (i.e., they do not complete the
requisite number of sessions as mandated by the LEA or state), injury, failure in
academics or scenario-based training. (Lockie et al., 2019, p. 1)

For more information on creating reference list citations, refer to other pages on the APA Style Guide. 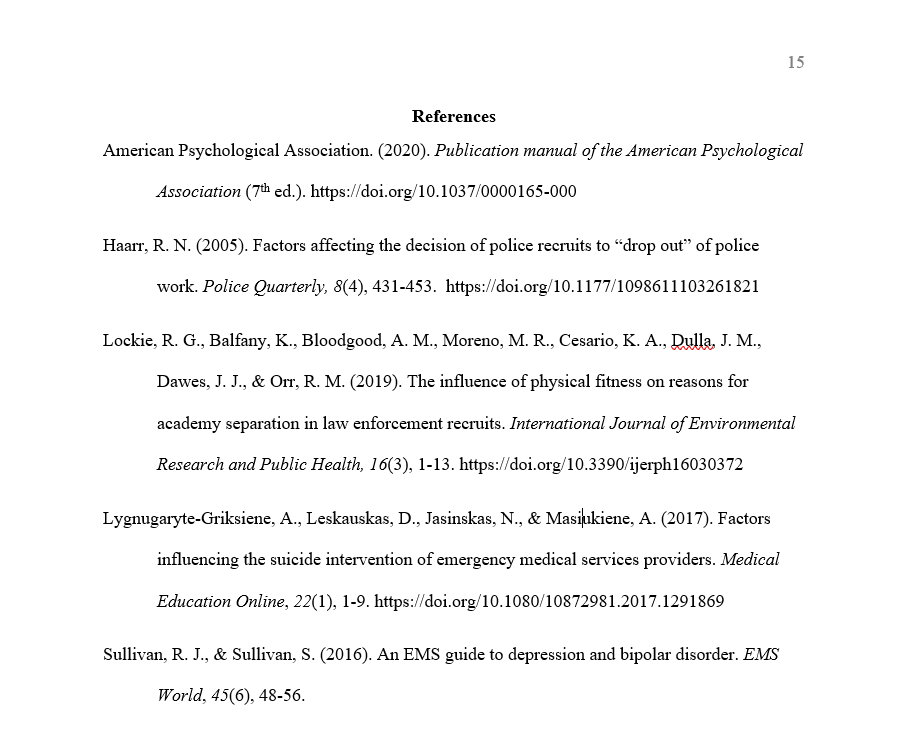 Only include tables and figures in your essay if the information cannot be communicated in the text of your paper. Tables are generally used to show numerical or textual information while figures tend to be more graphical representations such as a chart, graph, photograph, or drawing. For ease of explanation, only the word “table” will be used below, but the same applies to figures; if figures differ then it will clearly be indicated.

The follow elements are required for tables and figures in APA Style:

Each table that you place in your paper is numbered consecutively (Table 1., Table 2., etc).

Each table that you place in your paper has a title. Titles for tables should be brief, clear, and explanatory.

Each table that you place in your paper should include a note afterwards to further explain the supplement or clarify information in the table or figure to your paper and can be general, specific, and probability.

Referring to Them in the Text: In your paper, refer to every table that you have inserted. Do not include a table in your work that you do not clearly explain in relation to the ideas in your paper.

If you did not create the table yourself, for instance if you found it on the internet, you must include a copyright attribution in a note below the table.

Please see pages 390-391 in the Manual for example copyright attributions.

Tables may be placed either within the text of your paper or all together at the end of your document after the reference list. In either location, tables should be aligned to the left margin, (not center aligned). 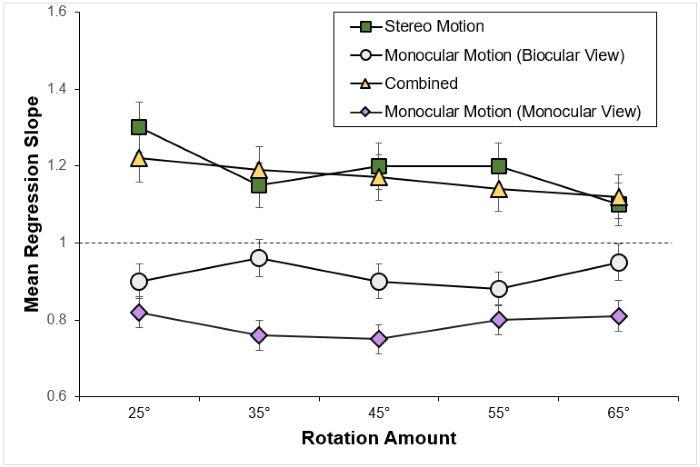 Appendices are used to include information that supplement the paper’s content but are considered distracting or inappropriate for the overall topic. It is recommended to only include an appendix if it helps the reader comprehend the study or theoretical argument being made. It is best if the material included is brief and easily presented. The material can be text, tables, figures, or a combination of these three.

Appendices should be placed on a separate page at the end of your paper after the references, footnotes, tables, and figure. The label and title should be centre aligned. The contents of the appendix and the note should be left-aligned.

The follow elements are required for appendices in APA Style:

Each appendix should have a title, that describes its contents. Titles should be brief, clear, and explanatory.

Referring to Appendices in the Text:

In your paper, refer to every appendix that you have inserted. Do not include an appendix in your work that you do not clearly explain in relation to the ideas in your paper.

If you did not create the content in the appendix yourself, for instance if you found a figure on the internet, you must include a copyright attribution in a note below the figure.

Please see pages 390-391 in the Manual for example copyright attributions.

Thank you for using the JIBC Library's new APA 7th ed. Guide. It's the same great content, with a new look & feel.
We'd like to know more about your experience using the new APA Guide and invite you to take our quick feedback survey, available at: JIBC Library APA Guide Feedback.

The JIBC APA 7th Edition - Formatting your Paper page was adapted with permission from the University of British Columbia's APA Citation Style Guide - Formatting Your Paper.